Home > Blog > How to increase sales with UX? Find out what solutions and tools to use. 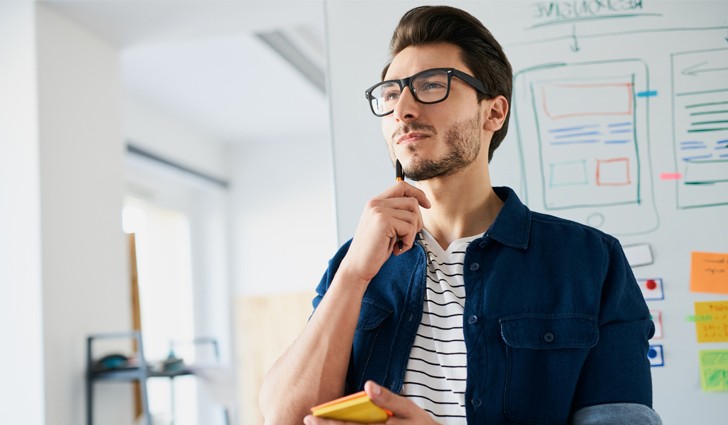 Good user experience is the basis of a high conversion rate. This is what we should focus our attention on when optimizing the site.

In the article about 5 indicators for analyzing traffic on a website I have mentioned (here), that sales can be increased even up to several times, while still having the same traffic on the website. Time for specific numbers, examples of solutions and tools..

It is worth to mention one example of a quite spectacular Usability optimalization from the well-known Polish start-up - Brand24. After changes in the registration form itself, the company has managed to increase the conversion rate 3 times. The number of people who signed up for a test account after entering the registration form increased from 2,5% to 7,5%. 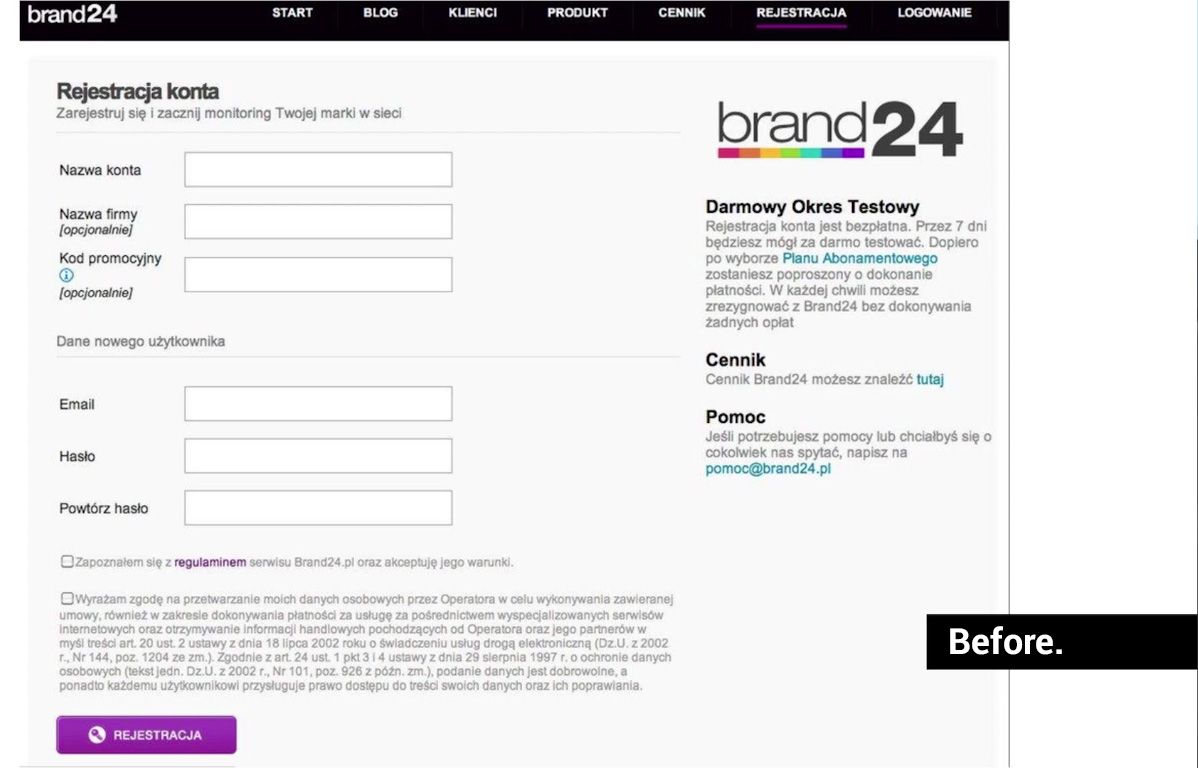 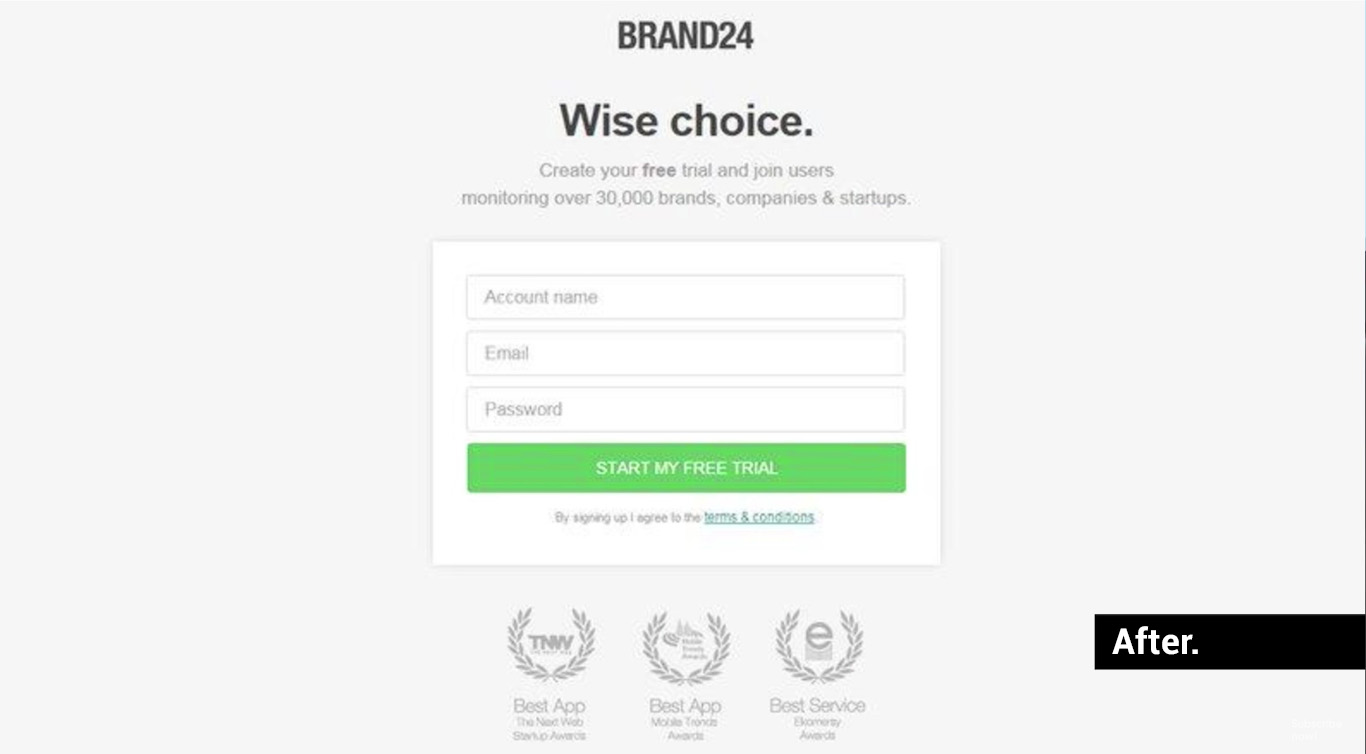 Number of fields in the original case was simply asking for rejection. The main problem was the input for the discount code, users were unsuccessfully looking for and after all leaving the site. The number of registration form fields must be reduced to a minimum. You can ask for the rest of the information in the next step or after logging in. Also an interesting alternative is to create separate forms for specific target groups. It is also worth to add thoughtful copywriting. Users love to be applauded and convinced of the rightness of their choice. Brand24 has made it very well.  Simple congratulations for their “Wise choice.” and mentioning a significant number of brands that are already using the tool, which motivates the user to register.

Going further, an absolute priority over all is to get the user's email address. Later, even if they fail to take further steps, we may simply send them an email reminder with a number of benefits encouraging them to continue signing up. Therefore, after correctly drawn conclusions, the current registration form looks as follows:

That's right, the registration form is now placed at... the center of the homepage. It has been drawn to the top, to the foreground and as simplified as possible. A simple, effective and still good looking solution. This has increased the number of created accounts by 25%! Thanks to optimizations, with 50 000 new users per month, the site generates 5,000 new test accounts. So, as many as 10% of new visitors are testing the product! This makes a substantial importance in converting to the final number of subscriptions sold.

It is worth to simplify, shorten the user's path to our goal. Similar treatments should be used to optimize the shopping process, contact form, or newsletter subscription. In an online shop it is worth to allow shopping without account registration. On websites and platforms contact forms need to be simplified, divided into steps or supported by an alternative livechat widget. Each time, to a greater or lesser degree, this will increase the percentage of users who choose to purchase, register or contact. This investment will pay off in the long run.

Increasing the effectiveness of buttons

The second aspect are the buttons, the elements that allow you to take action on websites, shops or platforms. Buttons are not equal to each other, they should be designed and located accordingly depending on their function. In case of the "converting" buttons that fulfill your main stated purpose, these are the so-called Call To Action buttons. These are buttons calling for actions such as account registration, purchase, form filling, file download. The key features that affect their clickthrough rate (CTR) are shown below. These aren't incredibly top design examples, but let's take a look at the treatments used and the results in specific numbers.

It turns out that most of the buttons located on the right side have better clickthrough rates. This is because most people are right-handed, and the page reads from left to right, ending in the lower right corner.

However, as the example above shows, everything depends on the situation. You shouldn't always be confident by following the rules. On the above website 30.8% more conversions took place on the left. One of the likely causes for this behavior is surprise. A user accustomed to certain design standards used in most websites is less likely to expect a form or advertisement on the left-hand side. Therefore, a non-standard placed element raises a greater interest by breaking through the subconsciousness, bypassing the learned "banner blindness".

Rounded corners, shape and size of buttons also matter. The main rule is that the more a button resembles a physical object that is easy to press, the more likely it is pressed. Sometimes, however, you can also find the opposite result. It would seem that increasing the button's size will increase its visibility and legibility. In the example above, the increase in height caused a decrease in clicks by 10%. We can draw a conclusion that the button began to overwhelm with its size to the point of being too imposing and demanding too much of a commitment. The key to success is to find a golden mean.

Changing the color of the button to red increased conversion by 21%. One reason for growth is that the green color is instinctively associated with the green light that says "go", while the red "stop!" and "take action". In this situation, the red button is more distinctive from the rest of the elements, and it keeps the user's attention, encouraging action.

It would seem that websites should speak to us in the second person. In this case, changing the text to “Start my free 30 day trial” increased clickthrough rates by as much as 90%!

Here is another example of the power of words. Dustin Curtis experimenting with the name of the link to subscribe to his twitter:

What tools to use for effective UX analytics?

We finally reach the question - how do we know if the changes we've made actually improve the conversion? Unfortunately, analysis has to go here with trial and error - A/B tests. So we need to carefully study the effectiveness of the changes.

Here are two examples of tools that make it easiest to perform a usability analysis to improve efficiency.


The most interesting and probably the simplest tool (used primarily by Michał Sadowski from Brand24) to visualize convertion funnels at any time and location of the site. In contrast to Google Analytics, adding more events to measure from time to time does not require code interference.

All we need to do is click on the live page and parse back, since the tracking script has been added to the code. The free version allows you to analyze the last 3 months, which can be good enough for A/B testing. 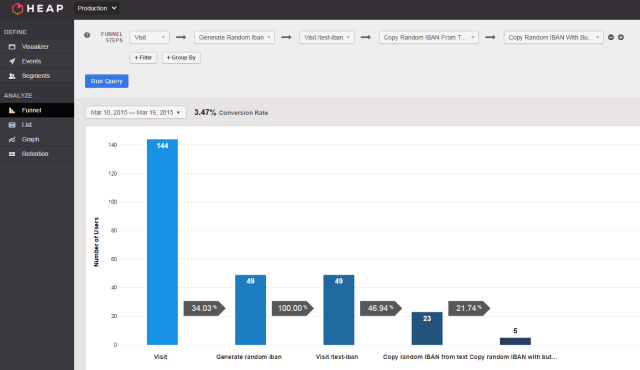 We are able to quickly find out in which phase of the conversion funnel the biggest "blockage" takes place and makes larges bounce rates.


Like Hotjar, it allows you to analyze by recording exactly what the user sees on the screen, tracking each move with the mouse and the content typed in forms. Sometimes, we may notice that the user performs an unpredicted activity or remains helpless, stops at some stage, and then leaves the page. What are the benefits? We get an opportunity of a very detailed interface optimization.

Additional functionality is to create heatmaps having the “hottest” spots with the highest click numbers. 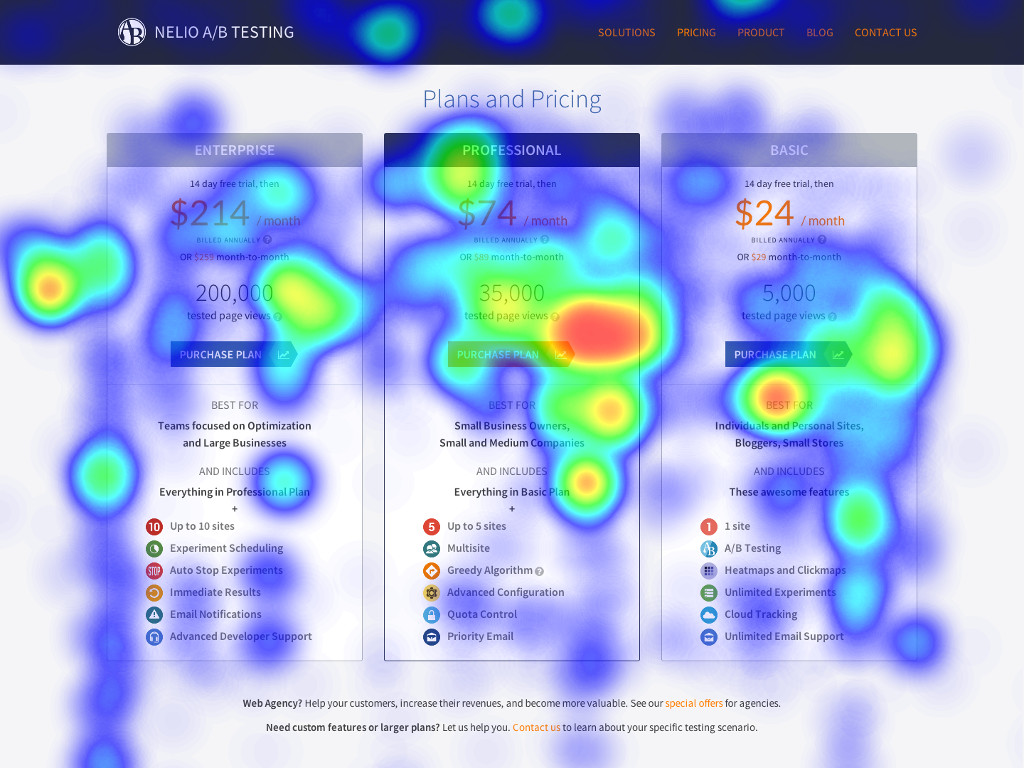 It gives you the ability to check which areas of your site are clickable by users and which are not.

Equally interesting functionality is a graphical scroll map with the percentage of visitors reaching chosen point.

We can analyze the attractiveness of blog entries and case studies.

There are tons of tools and examples of optimization solutions. In general, everything is meant to increase the flow of users through the conversion funnel. Most importantly it is good to know that the more visitors pass through the beginning of funnel, the more powerful the difference is at the very end. Therefore, well-designed forms or CTA buttons, being practically the first in the whole process, are extremely important. 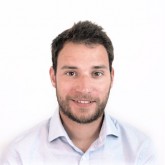 Author: Adam Machowiak Head of Design & Growth
Manages the creative department. His aesthetic sense, knowledge of the UX principles and the ability to translate Clients' needs into visuals make each project exceed the expectations. When he is not busy with design, he pursues his passion for landscape photography and videos.